8 Statues You Have to Visit in Dublin 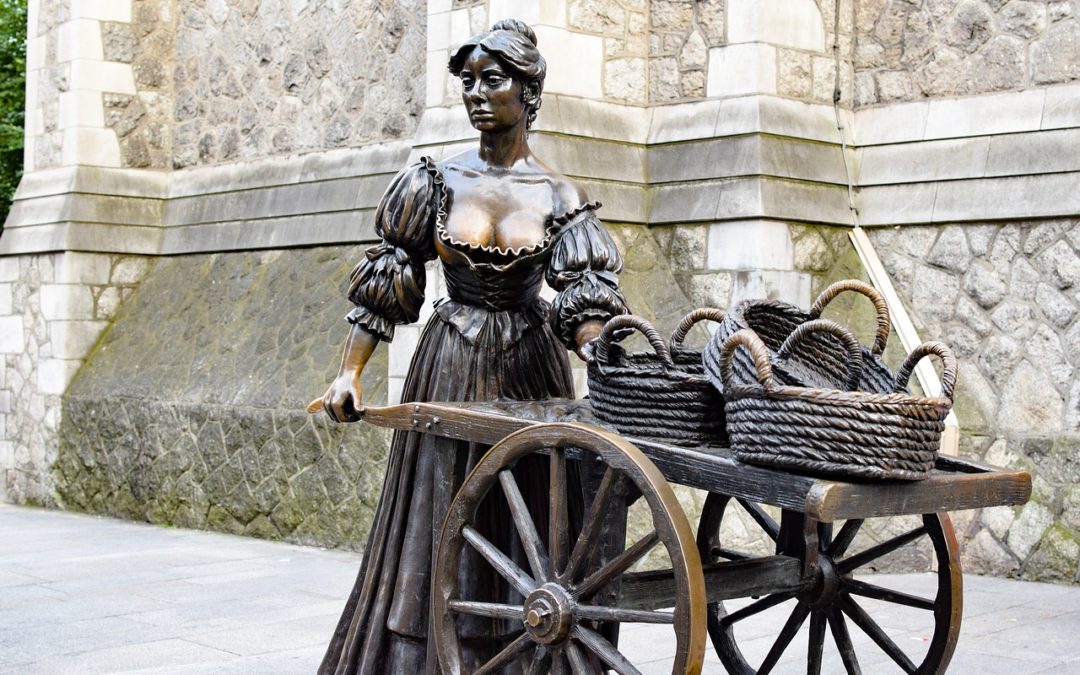 If you come to Dublin, a must-do trip is a walking tour of Dublin’s famous statues. It’s the ideal way to refresh if you’ve been travelling around having a chauffeured tour of Ireland as it provides the perfect opportunity to stretch your legs and get some fresh air.

Dublin is a lovely city to explore on foot, being relatively flat and with most of the major sights grouped closely together. You should be able to see plenty of interesting places around the city without feeling exhausted.

The Irish are sentimental people, in general, so you’ll no doubt discover the warm welcome you’ll receive just about anywhere you go. But another clue is that they’ll seize any opportunity to build a monument, and so there are dozens of them just in Dublin alone.

On that note; the following are nine of the most famous (and best) statues in Dublin’s Fair City.

Molly Malone is one of the most famous statues you’ll see in Dublin. Any time you walk past it, there are always people there admiring the monument and taking pictures. Previously, located in Grafton Street, the statue now stands on Suffolk Street near the Visit Dublin centre. She forms the of attention for The Dubliner’s song “Molly Malone”.

Wonderfully attired in clothes that no sensible Irish lass of her time would have been caught dead wearing, her statue is known locally as “the tart with the cart”.  She is well worth a visit, because the excellent scenery in the background helps to make her even more photogenic so don’t forget your camera!

Just a short distance from the Spire, you’ll find a statue of the man for whom O’Connell Street is named. A national hero of Ireland, Daniel O’Connell was a pacifist and an activist who played a key role in the emancipation of Irish Catholics from centuries of oppression.

Also very close by the Spire is a monument to another great Irish activist, James Larkin. The statue shows Larkin, who was affectionately known as ‘Big Jim’ by his supporters, with his hands outstretched as though appealing to a higher power to notice the plight of his fellows. The sides of the statue’s base include an inscription of a quote from one of his speeches, and excerpts of poetry written about him.

William Smith O’Brien was the leader of a failed rebellion which occurred in July 1848. After surrendering, he was arrested and sentenced to death. This sentence was commuted to transportation, a common punishment of the time, and O’Brien was sent to Van Diemen’s Land (Tasmania).

The statue erected in his honour depicts him leaning casually against a tree stump, arms crossed defiantly, with a steady gaze that gives him an almost majestic bearing despite his casual pose.

A more sombre monument can be found outside Custom House Quay. It features five sorrowful human figures, emaciated and dressed in rags, as well as an emaciated dog. It’s a hauntingly realistic reminder of the tyranny that led to one of the worst disasters in modern Europe.

Two ill-fated martyrs who were imprisoned for little more than being Catholics, and who died in prison due to the poor conditions in which they were kept. To free themselves from this horrid captivity would merely have required a renunciation of their faith, yet they never gave their captors the satisfaction.

Just outside Connacht House, you’ll find the statue of Queen Maeve, a primary antagonist in the story of the Cattle Raid of Cooley. Clutching a spear in one hand and holding up a severed bull’s head with the other, the giant nude female figure is certainly an imposing sight.

8. The Spire Of Dublin

Although not a statue per say, The Spire may be regarded as the most prominent monument is Dublin. It is a large, stainless steel, pin-like monument located on O’ Connell Street. Designed by Ian Ritchie Architects, it can come in handy for tourists to find their way around Dublin.

It’s a very difficult landmark to miss, especially at night, when it is brightly illuminated. Standing at just over 121 m tall (398 ft), the needle-like sculpture cost the city €4,000,000 when it was commissioned in 2003. For all the world it looks like a missile about to be launched, though if you ask locals, you’ll hear quite a few more colourful descriptions of what they think it represents.